This usually occurs in people with type 1 diabetes, but DKA can develop in any person with diabetes.  Since type 1 diabetes typically starts before the age of 25, diabetic ketoacidosis is most common for this age group, but it may occur at any age with both males and females are equally affected. So is DKA something that we should be worried about? Lets take a closer look!

So what’s the deal when our results come back showing ketones in urine? Circumstances arise for people with type 1 diabetes when the individual does not have enough insulin, a hormone the body uses to break down sugar (glucose) in the blood for energy. When glucose is not available to feed our cells due to high blood sugars, fat is broken down and used as fuel vs glucose and this is particularly not a good thing.  As fats are broken down, acids called ketones build up in the blood and urine.  In high levels, ketones are extremely poisonous.  This condition is known as ketoacidosis.

Blood glucose levels rise (usually higher than 300 mg/dL) because the liver makes glucose to try to combat the problem.  However, the cells cannot pull in that glucose without insulin.

Although not common, people with type 2 diabetes can also develop DKA, but it is rare and typically triggered by a severe illness.

What Are The Warning Signs Of DKA?

DKA usually develops slowly. But when vomiting occurs, this life-threatening condition can develop in a few hours. Early symptoms per the American Diabetes Association include the following:

Then, other symptoms appear:

Any of these symptoms should immediately be discussed with your doctor and they will let you know the next course of action, including treatment options or better yet, a trip to the ER may be in order especially if you can flush them from your system.  Speaking of treatment options, what can you expect?  Lets take a closer look.

END_OF_DOCUMENT_TOKEN_TO_BE_REPLACED

What Is HHNS And Why Are Type 2 Diabetics More At Risk? 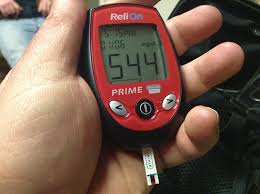 I fielded a question the other day on my Facebook page asking if I’ve ever head about a condition called HHNS or hyperosmolar hyperglycemic nonketotic syndrome.

HHNS can happen to people with either type 1 or type 2 diabetes that is not being controlled properly.  What is HHNS though, and is it really similar to DKA or is it just your typical run of the mill high blood sugar?  Lets take a closer look!

People over the age of 65 with type 2 diabetes are at greater risk of hyperosmolar hyperglycemic nonketotic syndrome (HHNS).  Even though it is possible, it is very rare in people with type 1 diabetes can develop HHNS. HHNS is a medical emergency caused by a very high blood sugar, typically over 600 mg/dL due to poor control. Your kidneys try to get rid of the extra blood sugar by putting more sugar into the urine. This makes you urinate more and you lose too much body fluid, causing dehydration.

As you lose fluids, your blood becomes thicker and your blood sugar level gets too high for the kidneys to be able to fix. With the high blood sugar and dehydration there is also an imbalance of minerals, especially sodium and potassium in the blood. The imbalance of fluids, glucose, and minerals in the body can lead to severe problems, such as brain swelling, abnormal heart rhythms, seizures, coma, or organ failure. Without rapid treatment, HHNS can cause death.

As mentioned earlier, HHS can happen to anyone, but is more common in older individuals who have type 2 diabetes. Symptoms may begin gradually and worsen over a few days or weeks. A high blood sugar level is a warning sign of HHS. I also found it very interesting that the symptoms are very similar to diabetic ketoacidosis (DKA) so its extremely important to be aware and if you suspect anything out of the ordinary, its imperative that you call 911 or get yourself into your doctors office.