Aspartame: Uses, Side Effects, Dangers For People With Diabetes 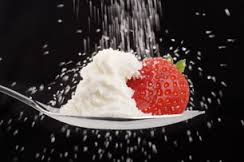 Have you noticed that the new diet Pepsi commercials you see on television say that the drink is now aspartame free? This is not surprising as aspartame or as its been so conveniently renamed “Amino Sweet” comes with a host of negative attention over the past couple of years so it only makes sense that we look and see why manufacturers claim it to be a “healthy” choice when it comes to sweeteners.

Personally when you compare aspartame along with its not so healthy counterpart sucralose, aspartame has much more warning signs as well as side effects. So lets take a closer look!

Aspartame is an artificial sweetener used widely throughout the United States.  According to Elmhurst College, aspartame is 180 times sweeter than sugar, and it contains only 4 calories per gram.  Its added to many sugar free foods and drinks and is also available in individual packets for personal use.  While the use of aspartame does have some benefits, there is controversy over the safety and possible side effects.  Elmhurst College states that aspartame breaks down into aspartic acid, phenylalanine and methanol in the body when it’s consumed which can cause side effects such as headache, dry mouth, diarrhea and gas just to name a few.  Sound fun?  Lets examine further.

Per Medicinenet.com, In an initial study, 12 rats out of 320 developed malignant brain tumors after receiving aspartame in an FDA trial.  There have been other studies to both support and contradict this finding.  A recent study, conducted by Italian and French researchers indicates there is no association between low-calorie sweeteners and cancer. The researchers evaluated a variety of studies between the years of 1991 and 2004.  These studies assessed the relationship between low-calorie sweeteners and many cancers, including oral and pharynx, esophagus, colon, rectum, larynx,breast, ovary, prostate, and renal cell carcinomas.  The researchers examined the eating habits of more than 7,000 men and women in their middle ages (mainly 55 years and over).

Based on the data evaluated, there was no evidence that saccharin or other sweeteners (mainly aspartame) increase the risk of cancer in humans.

All in all several studies have researched the connection between aspartame consumption and cancer,but there is no conclusive evidence to suggest that aspartame increases the risk of cancer in humans

Needless to say, the debate continues while more research is conducted.

Think about this for a second, according to a study conducted by Swithers and Davidson, aspartame can cause individuals to consume more food because their bodies are looking to fill the empty calories consumed.

Yikes! Also, contrary to popular belief, studies have found that artificial sweeteners such as aspartame can:

This was another study that was very insightful on the subject and has been published showing that saccharin and aspartame cause greater weight gain than sugar.

When it comes to diabetics, there is actually another study that I was reading that also shows that aspartame decreases insulin sensitivity. Aspartame fed male and female mice had elevated fasting blood glucose levels compared to non-consumers of aspartame.

“A random-fed insulin tolerance test administered at 19 weeks of age showed that glucose levels in male aspartame-fed mice were 120.2 percent higher than control mice following insulin challenge and remained significantly elevated above controls for up to 30 minutes, suggesting impairment of glucose and insulin regulation. The mean Area Under the Curve (AUC) in male aspartame-fed mice was significantly higher than control, suggesting deregulation of glucose homeostasis.

All in all, you may want to rethink that diet soda and other food products that contain aspartame and artificial sweeteners in general as they may be causing you to put on weight vs. taking it off as they have the ability to increase your food cravings and could possible be effecting your blood sugar readings.

Thanks to the Freedom of Information Act, the FDA has been required to keep of list of reactions and related aspartame side effects, all 92 of them. They include:

And these issues are mild compared to the other dangers. Turns out, many conditions are worsened or even brought on by aspartame, including brain tumors, Parkinson’s disease, and Alzheimer’s disease. The saddest part is that scores of people across the globe are still unaware of the dangers of aspartame, because the trillion 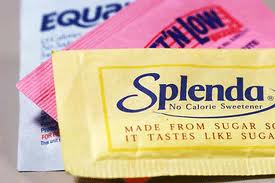 dollar diet industry does not want to lose this golden egg.

Aspartame has been their source of big bucks and they do not want this door to close.  This is the basic reason why the facts about its dangers have been brushed under the carpet for the past several decades. Aspartame is used in the manufacture of more than 5,000 different food products.  When taking aspartame tablets as a substitute for sugar, you should listen carefully to your body’s reactions, and in case of any adverse symptoms stop taking aspartame, because all the symptoms regress when the drug is withdrawn.

« Diabetic Nephropathy, How Diabetes Effects The Kidneys:
What Is GERD? Recognize The Signs And Symptoms »