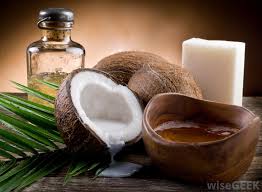 One of major components that we’ve switched out in our household is what we cook with – After researching several alternatives there was one that kept popping up, coconut and coconut oil and here’s why.

Lauric acid is representative of a class of biological molecules called fatty acids.  It is a white or colorless organic solid with needle-like crystals.  Coconut and palm kernel are the major sources of lauric acid.  It exhibits strong antimicrobial activity and thus is used by pharmaceutical companies that prepare antimicrobial drugs.  Lauric acid tends to irritate the mucous membrane of the gastrointestinal tract.  Consult your physician to determine if lauric acid-based medications are safe for you.

Both palm oils and coconut oil, excellent sources of lauric acid, are acceptable for use in cooking.  The first type is widely used in commercial food production, because it is relatively inexpensive.  The second is prized for its sweet flavor and is often preferred for making particular types of seafood.  The use of these options varies by region.  In the United States and much of North America, for example, people rely more on vegetable oil, but many tropical countries still predominantly use coconut and palm versions.

In recent years, researchers have stigmatized both these oils as being unhealthy, largely due to studies that suggested that saturated fats, including lauric acid, raise “bad” LDL cholesterol and contribute to problems such as heart disease.  In reality, many medium-chain fatty acids can be quite beneficial.  Experts also now know that the worst offenders are trans fats, which come from the hydrogenation of vegetable oils and which simultaneously raise LDL and lower “good” HDL cholesterol.  They recommend avoiding hydrogenated oils for this reason and suggest that, in general, saturated fats such as dodecanoic acid should make up no more than 10% of a person’s dietary calories.  A better understanding of the different types of fats and their health implications is leading to coconut and palm oils becoming more popular.

How The Body Uses Lauric Acid:

The human body converts lauric acid into monolaurin which is claimed to help in dealing
with viruses and bacteria causing diseases such as herpes, influenza, cytomegalovirus, and 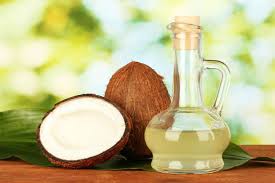 even HIV.  It helps in fighting harmful bacteria such as listeria monocytogenes and helicobacter pylori, and harmful protozoa such as giardia lamblia.  As a result of these various health benefits of coconut oil, though its exact mechanism of action was unknown, it has been extensively used in Ayurveda, the traditional Indian medicinal system.  The Coconut Research Center has compiled various benefits in both traditional and modern medicine.

If this article on coconut oil and lauric acid was helpful, please leave a comment right below my bio or hit the share button to share with your friends 😀